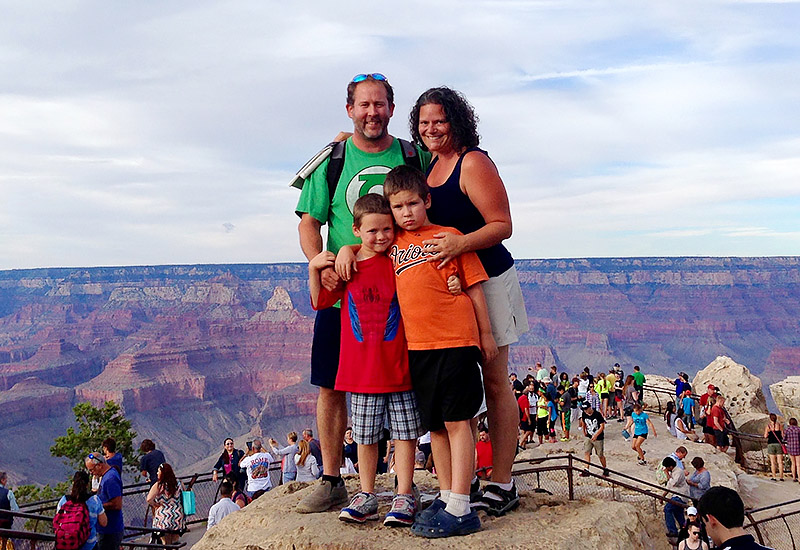 After leaving Vegas Sunday, we arrived at the Grand Canyon.  We were going to camp just outside of the park in the Kabib Forest for free taking advantage of the free forest service public land dispersed camping.  When we arrived at the Grand Canyon, the campgrounds all said “full”, but we tried to see if there was a tent site they forgot.  Turns out, yes, they had vacancy, really quite a bit from what it seemed.  With our National Parks Access Pass we were able to stay 3 nights in the GC for $9/nt!  We also got to use our new 3 room tent for the first time, and it was so nice being able to spread out and stand up all the way.  We put our tent in the perfect spot, thankfully, because Monday morning it rained and rained but we stayed dry!

I had been to the GC once before with my dear departed friend Della in 1997, but it was Brian & the boy’s first time. It was beautiful and AWEsome, I loved watching as Max’s mouth gaped open as he stared into the breathtaking depths below.

We hiked the South Kaibab trail down into the canyon (not the whole way) and we saw two packs of mules coming up the trail.  The boys earned their junior ranger program badges for the Grand Canyon National Park, and we participated in 3 different ranger programs – Critter Talk (learned about Dragon Flies, including the club skimmer), Kids Rock (learned about Sapsucker Woodpeckers, hummingbirds, rock squirrels, and the California Condor (once near extinction, with only 22 remaining in the world in 1987, but through captive breeding efforts have been able to repopulate to over 400 today).

We learned lots of really interesting things, like a dead tree that is still standing is called a snag, and it supports 10,000 times more life forms than a living tree.  We learned about the Great Horned Owl, that has tiny down feathers all the way down and to his talons, so he’s super quiet when he flies toward prey and they can’t even hear him coming.  We learned that they have amazing hearing, you could blindfold one and they would still be able to track and catch their prey using only their hearing. We learned about the amazing Rock Squirrel, and how they know that rattlesnakes have a heat-sensing pit organ that detects infrared heat, so they fluff up their tail, send lots of blood to it, and then thrash it around to confuse the rattlesnake.  When the rattlesnake is nice & confused, the squirrel throws rocks at the rattlesnake to try to block the snakes’ pits with dirt/debris so they won’t work as well, oh, and by the way, the adult rock squirrels are also immune to rattlesnake venom so it is not uncommon to see the two fighting.

We saw that the Grand Canyon has some of the biggest Ravens I have ever seen.  They looked like straight up black chickens.  They were huge.  I think it’s kind of funny that we’re from Maryland, the home of the Baltimore Ravens (granted, named for a different “Raven” of edgar allan poe fame) but it wasn’t until we got to the pacific coast that I really saw my first one.  They are noticeably larger than crows, and they make all kinds of interesting noises, and did you know, they have a wing span of about 4 feet!

The California Condor, however, has a wing span of 9.5-10ft, and stands 3 feet tall!  They eat carrion, and have evolved to have a rather unattractive bald head so that it doesn’t get more disgusting as it shoves it into the dead carcass it feeds on.  California Condors mate for life (usually – unless they are unable to breed or if something happens to either one of the pair), the female and male both incubate the egg and care for the chick once it’s hatched.  The female CC lays one egg every other year, which is why it is taking a long time to rebuild the population.  The neat thing is that CC’s can double clutch, meaning if something happens to the egg they have, they can produce another one if it’s early enough in the season.  They have even had success through captive breeding, having females triple clutch.  But then you have two babies that don’t have a mom/dad to care for it (leaving the 3rd with the parents), so the program used condor puppets to feed and care for the chicks so that they wouldn’t become humanized.  They now have more CC’s living free in the wild, than they do in captivity.

They’ve  almost 100 CC’s over the years, and have determined the leading cause of death for CC’s is lead poisoning.  People throw coins into the canyon or other places, and the condors ingest them.  The build up of lead in their body overtime is toxic and ends up killing them.